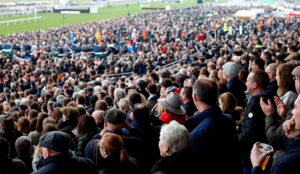 Barring interruptions due to weather, foot-and-mouth disease and, most recently, a multi-million pound redevelopment of the racecourse, the King George VI Chase has been a fixture of the Christmas Festival at Kempton Park since 1947. In today’s world full of uncertainties its good to know that there are ‘real world’ mainstays, that can occasionally draw us away from  online casino usa. However, what has since become the second most prestigious steeplechase in the country, after the Cheltenham Gold Cup, was inaugurated in February, 1937. The race was named after King George VI, who had succeeded to the throne following the abdication of his elder brother, Edward, the previous December.

The King George VI Chase was run just twice before World War II, during which Kempton Park was requisitioned for military purposes, and did not return until 1947, by which time it had moved to its now traditional Boxing Day slot. Fifteen horses have won the King George VI more than once, but the most successful ever was dual Cheltenham Gold Cup winner Kauto Star, who won five out of six renewals between 2006 and 2011. The illustrious roll of honour also includes Arkle, Wayward Lad, Desert Orchid, Best Mate and Long Run, to name but a handful.

Nowadays, the King George VI Chase is a Grade 1 contest, in which horses aged five years and upwards carry 11st 10lb, four-year-olds carry 11st 1lb and mares and fillies receive a 7lb allowance. Indeed, the race forms the middle leg of the so-called ‘Jockey Club Chase Triple Crown’, which offers a £1 million bonus to any horse that wins the Betfair Chase, King GeorgeVI Chase and Cheltenham Gold Cup. Paul Nicholls is the leading trainer in the history of the King George VI Chase, with twelve winners between 1997 and 2020. What will this years race hold for us I wonder. I’ll be taking a break from www.wolfwinner.com to find out on the day!