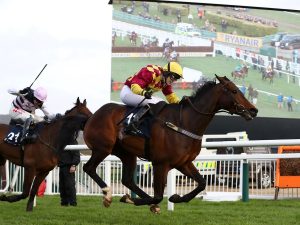 Horse racing festivals – that is, major multiple-day events featuring the crème de la crème of equine talent – are staged throughout the length and breadth of United Kingdom between March and December. We’ve previewed a few selected highlights, just to whet your appetite for the coming year.

Known in some quarters as the ‘Olympics of horse racing’, the Cheltenham Festival is the undisputed highlight of the British National Hunt season. Extended to its current, four-day format for the first time in 2005, the Festival includes four major ‘championship’ races – namely, in chronological order, the Champion Hurdle, Queen Mother Champion Chase, Stayers’ Hurdle and the Cheltenham Gold Cup – plus a full supporting card of 24 high-quality races.

Following hot on the heels of the Cheltenham Festival, the Aintree Festival understandable revolves around the most famous steeplechase in the world, the Grand National, run on the third and final day. However, the Aintree Festival also includes two more races – the Foxhunters’ Chase and the Topham Chase – on the celebrated Grand National Course and no fewer than ten prestigious Grade One contests in various disciplines and over various distances.

As the name suggests, the Epsom Derby Festival centres on the running of the most valuable race in Britain, the Derby, which is run on the second day. However, the Derby is preceded, on day one, by the second fillies’ Classic, the Oaks, and the Coronation Cup – a Group One contest open to older horses and both sexes, both of which are run over the same course and distance as the Derby itself.

Ascot Racecourse, a favourite with YesBets visitors, was founded in 1711 by Queen Anne, the first recognisably modern Royal Meeting took place in 1768 and Ascot Racecourse has enjoyed Royal patronage ever since. Nowadays, the Royal Procession drive up the Straight Mile serves as a prelude to five days of world-class horse racing action, including eight Group One races, at least one of which is staged every day. Highlights include the Queen Anne Stakes, King’s Stand Stakes and St. James’s Palace Stakes on day one, the Prince of Wales’s Stakes on day two, the Gold Cup – the traditional highlight of the whole week – on day three, the Commonwealth Cup and Coronation Stakes on day four and the Diamond Jubilee Stakes day five.

Horse racing at Goodwood was the brainchild of Charles Lennox, Third Duke of Richmond, in 1802. In the intervening centuries, the Goodwood Festival, often referred to ‘Glorious Goodwood’, has evolved into a five-day bonanza of horse racing action on the Sussex Downs. Three of the 13 Group races staged during the week – namely the Sussex Stakes, Goodwood Cup and Nassau Stakes – have been awarded Group One status and, as such, form part of the British Champions Series.