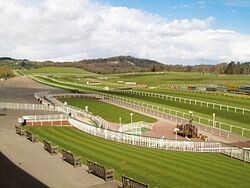 Situated in Piercefield Park, to the north of the town of Chepstow in Monmouthshire, South East Wales, Chepstow Racecourse is probably best known as the home of the Coral Welsh Grand National, which was transferred to the course following the closure of nearby Caerleon (Newport) Racecourse in 1949. The Coral Welsh Grand National, worth £150,000 in prize money, is nowadays the most valuable race run in Wales, while the £50,000 Finale Juvenile Hurdle, staged at the same meeting, is one of just three Grade 1 races of its kind in the British National Hunt calendar. Big bucks, on a par with the best online casino new zealand.

However, at the time of its conception, by a group that included Lord Glanely, Lord Tredegar and Lord Queensborough, in the early Twenties, Chepstow was intendeded to be a Flat racing venue. Chepstow staged its inaugural fixture in 1926 and, in 1933, Sir Gordon Richards rode eleven consecutive winners, going through a six-race card on the Wednesday and returning for five more winners on the Thursday.

Nowadays, Chepstow Racecourse is owned by Arena Racing Company (ARC) and stages 32 fixtures, both Flat and National Hunt, throughout the year.  It’s a great course for punters when they’re on a break from the best online casino sites. The track itself is a left-handed oval, approximately two miles in circumference, with a five-furlong straight and characterised by pronounced undulations throughout. Consequently, the emphasis is on stamina even when the going is not on the soft side and, when it is, conditions can become attritional. All races up to a mile are run on the straight course, such that they are viewed almost head-on from the grandstands.