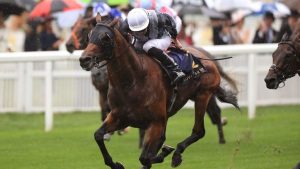 The St. James’s Palace Stakes is a Group One race run over 7 furlongs and 213 yards on the Old Mile course at Ascot Racecourse in Berkshire, South East England. The race is named after St. James’s Palace, a former royal residence built by King Henry VIII, in the City of Westminster, London and is staged on the opening day of the Royal Ascot meeting, held annually in June. The St. James’s Palace Stakes established in 1834 and, following the creation of the European Pattern in 1971, was initially assigned Group Two status before being upgraded to its present Group One status in 1988.

The 1947 winner, Tudor Minstrel, rated 144, had previously won the 2,000 Guineas by eight lengths and, according to some observers, could have done so by double that margin, or more. The 1971 winner, Brigadier Gerard, also rated 144, had also won the 2,000 Guineas, famously defeating subsequent Derby winner Mill Reef in the Newmarket Classic. The 1979 winner, Kris, rated a ‘mere’ 135 by Timeform, had suffered a narrow, shock defeat by Tap On Wood – ridden by a youthful Steve Cauthen – in the 2,000 Guineas, but would go on to win 14 of his 16 races. Much more recently, the 2011 winner, Frankel – whose rating, of 147, was the highest ever awarded by Timeform – arrived fresh from an impressive six-length victory in the 2,000 Guineas, but came as close as he ever did to losing his unbeaten record, but held on to win by three-quarters of a length.

The ‘Master of Balldoyle’, Aidan O’Brien, is the leading trainer in the history of the St. James’s Palace Stakes, with eight wins since the turn of the twenty-first century. Michael ‘Mick’ Kinane, erstwhile stable jockey at Ballydoyle, remains the leading rider, with six wins between 1982 and 2004. 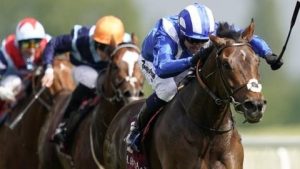 The Lockinge Stakes is a Group One race run over a straight mile at Newbury Racecourse, in Berkshire, South East England, in mid-May. Since 1995, the Lockinge Stakes has been open to colts, fillies and geldings aged four years and upwards and is, nowadays, the first Group One of the season for older horses.

The Lockinge Stakes takes its name from the parish of the same name, on the Isley Downs, north of Newbury and was established in 1958. At the time of its inauguration, the race was open to horses aged three years and upwards and was, in fact, won by 2,000 Guineas winner Pall Mall, bred and owned by Queen Elizabeth II; Pall Mall won the Lockinge Stakes again, as a four-year-old, in 1959.

Notable winners of the Lockinge Stakes down the years have included Habitat, Brigadier Gerard and Frankel. Indeed, Frankel was last horse to win the Lockinge Stakes and the Queen Anne Stakes at Royal Ascot; in the latter contest, in 2012, Frankel earned a Timeform rating of 147, the highest ever awarded to a horse racing on the Flat. 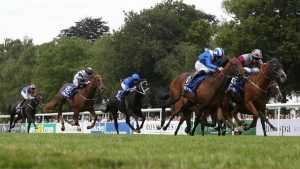 The July Cup is a Group One race run over a straight 6 furlongs on the July Course at Newmarket Racecourse, currently on the third and final day of the so-called ‘July Festival’ at the Suffolk venue.The race is open to colts, fillies and geldings aged three years and upwards and, with total prize money of £500,000 in 2019, is one of the most valuable, and prestigious, sprint races in the country. Indeed, since the Cartier Champion Sprinter award was established in 1991, no fewer than 13 winners of the July Cup have also been acknowledged as the champion sprinter in Europe in the same year.

The July Cup was inaugurated in 1876 and the first two runnings were won Springfield, a prolific son of St. Leger winner St. Albans, whose dam, Virilis, was owned by the reigning monarch, Queen Victoria. Following the introduction of the European Pattern in 1971, the July Cup was assigned Group Two status, but subsequently upgraded to Group One status in 1978. Since 1996, the July Cup has been sponsored by Darley Stud, the global breeding operation owned by Sheikh Mohammed, which has its headquarters at Dalham Hall, on the outskirts of Newmarket.

Historically, three trainers – namely Charles Morton, Vincent O’Brien and his namesake, Aidan O’Brien, who saddled the 2019 winner, Ten Sovereigns – have won the July Cup five times. The leading jockey in the history of the July Cup, though, is the incomparable Lester Piggott who, between 1957 and 1992, rode ten winners, including dual scorer Right Boy in 1958 and 1959.

The fastest time in the history of the July Cup was the 1 minute 9.11 seconds recorded by the four-year-old Lethal Force, trained by Clive Cox and ridden by Adam Kirby, who made all the running to win, readily, by 1½ lengths in 2013. In so doing, the son of Dark Angel not only supplemented his previous Group One win in the Diamond Jubilee Stakes at Royal Ascot the previous month, but also shaved four-tenths of a second off the previous record for 6 furlongs on the July Course, set by Stravinsky in the same race in 1999. 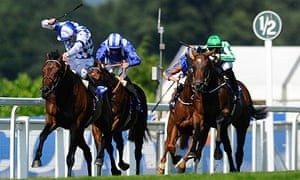 The Eclipse Stakes is a Group One race run over 1 mile, 1 furlong and 209 yards at Sandown Park Racecourse, in Esher, Surrey, in early July. The race is open to colts, fillies and geldings aged three years and upwards an, as such, provides the first major opportunity for three-year-olds of the so-called ‘Classic generation’ to race against older rivals. The Eclipse Stakes was established in 1886, under the auspices of Leopold de Rothschild, proprietor of the Southcourt Stud, near Leighton Buzzard and, at the time of its inauguration, was the most valuable race in the country.

The Eclipse Stakes is named after Eclipse, a champion racehorse who, in 1771, retired from racing undefeated in all 18 starts – albeit including eight walkovers – and was declared the greatest thoroughbred since the celebrated Flying Childers, nearly five decades earlier. However, since 1976, the Eclipse Stakes has been sponsored by Coral, nowadays part of GVC Holdings plc, and is often referred to as the ‘Coral-Eclipse’.

The roll of honour for the Eclipse Stakes reads like a ‘Who’s Who’ of middle-distance talent throughout the twentieth and twenty-first centuries and, since 1970, includes the likes of Mill Reef, Brigadier Gerard, Sadler’s Wells, Dancing Brave, Nashwan, Sea The Stars, Golden Horn and Enable. Five horses, including Mtoto in 1987 and 1988 and Halling in 1995 and 1996, have recorded back-to-back victories in the Eclipse Stakes.

Lester Piggott is the leading jockey in the history of the Eclipse Stakes with sevens wins, including on St. Paddy – erstwhile winner of the Derby and St. Leger – in 1961.  This was certainly something worth factoring in when looking to compare the odds. The so-called ‘Wizard of Manton’, Alec Taylor Jr., saddled six winners of the Eclipse Stakes between 1903 and 1923, including Lemberg, who dead-heated for first place in 1910, and Buchan, who won the race twice, in 1919 and 1920. Much more recently, veteran Newmarket trainer Sir Michael Stoute saddled the latest of his six winners, Ulysses, as recently as 2017 and shares the position of most successful trainer in the history of the Eclipse Stakes.