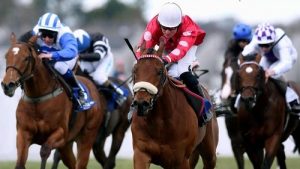 The Prix de l’Abbaye de Longchamp or, in English, ‘Prize of the Abbey of Longchamp’, is a Group One race run over a straight 1,000 metres, or 4 furlongs and 213 yards, at Longchamp Racecourse, in the Bois de Boulogne, west of Paris France. The race is open to colt, fillies and, since 2001, geldings aged two years and upwards. However, since 1972, just one juvenile – the Habitat filly Sigy, trained by Christiane ‘Criquette’ Head-Maarek and ridden by her brother, six-times French champion jockey Freddy Head – has won the Prix de l’Abbaye de Longchamp.

As the title suggests, the Prix de l’Abbaye de Longchamp was named after a thirteenth century priory which, prior to the French Revolution, occupied an area on the northern boundary of the modern racecourse. The race was inaugurated in 1957, when it was added to the Prix de l’Arc de Triomphe fixture, staged on the first Sunday in October, to celebrate the centenary of Longchamp Racecourse. Following the introduction of the European Pattern race system in 1971, the Prix de l’Abbaye de Longchamp was assigned Group Two status, but subsequently upgraded to Group One status in 1976.

The Prix de l’Abbaye de Longchamp is regularly contested by the crème de la crème of sprinting talent from the other side of the English Channel. Since the turn of the century, various British and Irish trainers, including David Nicholls, Clive Brittain, Roger Charlton (twice), Kevin Ryan (twice), Sir Mark Prescott and Charles Hills, among others, have tasted success in the Longchamp showpiece. Other illustrious ‘foreign’ winners down the years have included Sharpo, trained by Jeremy Tree, in 1982, Habibti, Timeform Horse of the Year, trained by John Dunlop, in 1983, Dayjur, European Champion Sprinter, trained by Dick Hern, in 1990 and Lochsong, Cartier Champion Sprinter twice, trained by Ian Balding, in 1993 and 1994.