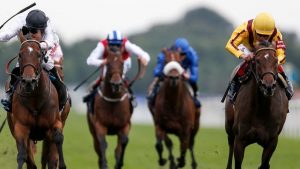 The Nunthorpe Stakes is a Group One race run over 5 furlongs at York Racecourse on the third day of the four-day fixture, known as the ‘Welcome to Yorkshire Ebor Festival’, staged annually in August. The Nunthorpe Stakes is open to colts, fillies and geldings aged two years and upwards and, as such, is not only one of the few races in which juveniles can compete against older horses, but the only Group One contest in Britain open to juvenile geldings.

Established, in its present guise, in 1922, the Nunthorpe Stakes takes it name from Nunthorpe, an outer suburb of Middlesbrough, on the edge of the North York Moors National Park, 50 miles or so north of York Racecourse. Since 2007, the Nunthorpe Stakes has been sponsored by the prestigious Coolmore Stud – headquarters of the largest thoroughbred breeding operation in the world – in Co. Tipperary, Ireland. In 2019, the Nunthorpe Stakes offered total prize money of £400,000.

Two horses – namely Tag End, in 1928, 1929 and 1930, and Sharpo, in 1980, 1981 and 1982 – have won the Nunthorpe Stakes three times. The leading trainer in the history of the race remains Australian-born Captain Oswald ‘Ossie’ Bell, who saddled five winners in the Twenties and Thirties. Flat racing legend Lester Piggott rode seven winners between 1958 and 1978 and is the leading jockey in the history of the Nunthorpe Stakes.

According to the ‘weight-for-age’ scale, which is designed to compensate younger horses for their lack of physical maturity, juveniles competing in the Nunthorpe Stakes carry just 8st 1lb. By contrast, three-year-olds carry 9st 9lb and four-year-olds and upwards carry 9st 11lb. However, despite a generous weight concession, of 22lb and 24lb, respectively, from the older horses, the last two-year-old to win the Nunthorpe Stakes was Kingsgate Native in 2007.

The 2019 renewal of the Nunthorpe Stakes proved pivotal, insofar as the winner, Battaash, trained by Charles Hills, recorded a time of 55.90 seconds and, in so doing, broke the five-furlong course record set by Dayjur 29 years earlier. Dayjur, trained by Dick Hern and owned, like Battaash, by Sheikh Hamdan Al Maktoum, was billed in his heyday as the ‘fastest horse in the world’; his winning time of 56.16 seconds was widely considered to be unbeatable.