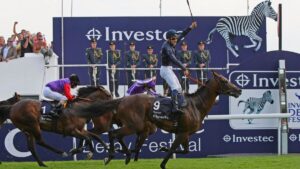 Although it was originally run over the ‘last mile of the course’, the Derby is, and always has been, restricted to three-year-old colts and fillies. Consequently, the Epsom Classic cannot ever have been won, at least not legitimately, by a four-year-old.

However, in 1844, inveterate gambler Abraham Levi Goodman attempted what the Solicitor-General later described as ‘a gross and scandalous fraud’, by substituting the four-year-old Maccabeus for the three-year-old Running Rein in the Derby.  Just looking at the year alone, it’s fascinating to see that today’s appetite for casino games online, horse racing and the like is nothing new. The swindle was initiated some 18 months earlier, when Maccabeus was saddled, as ‘Running Rein’, to land a gamble in a juvenile race at Newmarket.

Turf reformer Lord George Bentinck had suspected, at that stage, that the horse purporting to be Running Rein was an impostor. However, a subsequent inquiry collapsed when ‘Running Rein’ was postively identified by Northamptonshire farmer George Worley as the horse he had looked after in the winter of 1841/42. In the Derby, ‘Running Rein’ beat Orlando, bred and owned by Colonel Jonathan Peel, brother of Prime Minister Sir Rober Peel, by three-quarters of a length.

However, Lord Bentinck filed suit on behalf of Peel and, after a lengthy court case, lawyers for the connections of ‘Running Rein’ admitted that the horse had vanished and that ‘some fraud had been practiced’. The subtefuge was laid bare, ‘Running Rein’ was disqualified and the race was awarded to Orlando. It’s a relief that such behaviour was called out then as it often is now. Nowadays the hallmarks of a reliable betting environment, whether it’s a casino related one like www.bestusacasinosites.com , or the racing world, is that it’s above board and regulated to the point that those putting down their hard earned money can have faith in it.